“Leaders are like eagles. We don’t have either of them here.”

END_OF_DOCUMENT_TOKEN_TO_BE_REPLACED

I once saw a bald eagle soaring over the lake where our cottage is nestled in the woods. It looked magnificent, and the experience was made even more awe inspiring when the eagle swooped down to …

Well, it swooped down to snag a fish some tourists had left to get its attention so as to snap a magnificent photo of a bald eagle dining on a fish that looked just as if the eagle had accomplished something.

As Ben Franklin pointed out to his colleagues when they were choosing a national bird, the bald eagle rarely does its own hunting. Mostly it either acts like a more attractive buzzard, enjoying a gourmet meal of carrion, or it waits until some lesser bird catches something and then chases the hunter away and enjoys the spoils of theft. 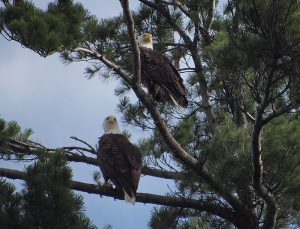 Poor Ben. In the middle of The Enlightenment, debating with exceptionally intelligent and well-read colleagues, his evidence and logic still lost out to the importance of an impressive image.

In an organization, Bald Eagles are managers who takes credit for the work of their employees.

But that isn’t what Bald Eagles do. They (the managers, not the raptors) get in front of the team to take credit when the team gets something important done, while hiding behind the team and blaming it when something goes wrong.

Oh, and, like their emblematic avian, when even a very small bird attacks them or their team, they cower and fly away, leaving their teams to fend for themselves.

Root Cause: What causes a manager to become a Bald Eagle is something of a chicken-and-egg story.

Okay, eagle-and-egg, and yes, as everyone knows by now, the egg came first; dinosaurs had eggs. And dinosaurs are sometimes the root cause, as in the Bald Eagle manager reporting to a management dinosaur who doesn’t understand the difference between getting something done and building an organization that can get things done.

Sometimes, in a case of trans-species transformation, a Bald Eagle is a former Remora who got promoted — someone who rose from the ranks of individual contributor by stealing as much credit and sloughing as much blame as possible. As managers, Bald Eagles are no more competent at any of the eight tasks of leadership than they were as Remora-like individual contributors. And never having experienced the feeling of competence they aren’t likely to become competent at them.

But with more authority and power than a Remora, Bald Eagles don’t have to just ride along waiting for scraps. They can grab the credit away from those who actually deserve it, and they do … because they can, and don’t have anything else going for them.

Dealing with Bald Eagles: If you discover you have a Bald Eagle reporting to you, the solution is simple: Get rid of the feathery bugger, because why would you do anything else?

That’s the easy one. If you find you’re reporting to one, the solution isn’t all that complicated either.

First, get over it. In the past, for example, I’ve ghostwritten articles for managers higher up in the food chain who got credit for my brilliant (well, relatively speaking) insights. I concluded there was no reason for me to get all riled up about the situation: I was paid for the time I put into the appropriated opus, after all, so the only problem there was my lack of ego gratification.

And second, remember that before anything else, all organizations are built on webs of interpersonal relationships. When you’re producing something worthwhile that your own Bald Eagle manager might misappropriate, ask your personal internal network to review your work in progress.

Once you take this step, there’s no need for you to make a fuss if the Bald Eagle does claim credit, because there’s a pretty good chance the claim will come to the attention of one or more of your goombahs. When it does, they’ll spread the word.

And if they don’t, you still have the get-over-it option at your disposal. As long as  you were paid for your time and weren’t asked to mis-report your hours … sure, there’s the injustice of it all. But between getting credit for the results and getting paid for the results, personally, I’ll take getting paid every time.

It appears the well-known story of Franklin debating the relative merits of the bald eagle and wild turkey with John Adams and Thomas Jefferson — the archetypical example of image trumping reality — is, in fact, apocryphal, an excellent (and ironic) example of how most of us, given a choice, will prefer a good story over what actually happened.

And thanks to Paul Schaefer for suggesting and describing this week’s beast.