KJRSpeak: All business is personal.

By way of “Tony Barrett’s dad,” or so Tony tells us (also, I’m told, the Godfather, not that there’s any connection).

END_OF_DOCUMENT_TOKEN_TO_BE_REPLACED

Okay, I admit it. I was a big fan of Eureka, not least because the show’s heroes (and villains, and, for that matter, extras) were smart people. Very smart people.

And while I’d have enjoyed another season or two, the show’s creators were wise enough to know it had run its course. And, having run its course, they showed they knew how they were going to finish the show when they filmed the first episode. (Anything more would be a plot spoiler. Watch it on Netflix and you’ll understand.)

Speaking of series finales, this marks the end of KJR’s series on IT critical success factors. And like any good series finale, it ends as it began — in this case, with relationships.

The series (about IT CSFs, not Eureka) began with how the relationship between IT and the rest of the business is defined and how it’s managed. It ends with team dynamics, inter-team dynamics, and whether every employee in IT feels a sense of ownership when it comes to the business/IT relationship. 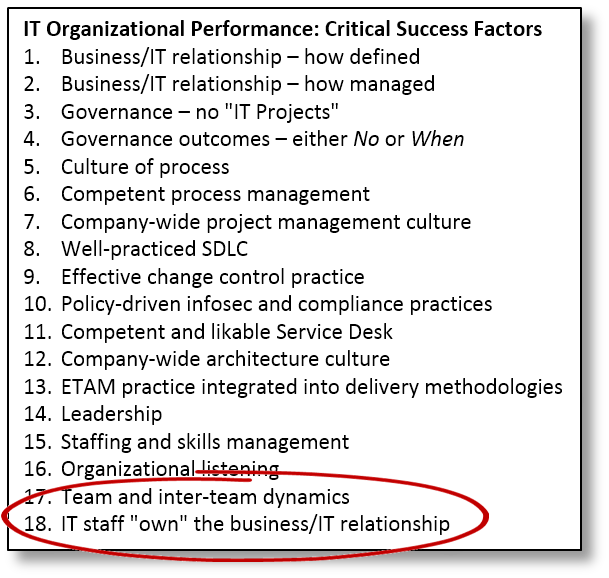 High on the list of what the best leaders take pride in is their ability to build strong teams.

It turns out that managing team dynamics is a lot like Michelangelo’s technique for crafting his most famous statue … his legendary explanation was that he merely chipped away everything that didn’t look like David.

Sometimes, the best a leader can do is chip away everything that doesn’t look like a strong team — in particular, two team members who can’t seem to get along with each other.

But sometimes two otherwise good employees, often for reasons they can’t even articulate, just rub each other the wrong way. Requiring them to like each other is a non-starter. Hollywood solutions, where they (for example) get lost in the woods and discover each other’s virtues are just that … pretty fictions that rarely happen in non-fiction settings.

The best leaders can do is inform both employees that if they can’t figure out how to work together effectively, one or both will find themselves working somewhere else.

See, teams aren’t comprised of individuals. They’re a collection of relationships, so a seven-person team consists of 21 interpersonal connections (the formula is n(n-1)/2). You might think this means that if two people can’t get along that’s just 1/21 of the team.

But it isn’t, because it doesn’t work that way: If two employees can’t get along they’ll both ask everyone else on the team to choose sides. And as no business process or practice can work without trust among all participants (see “Uncomfortable conversations,” KJR, 9/13/2010 or Chapter 4 of the KJR Manifesto), the more side-choosing that happens, the more team effectiveness will break down.

In software, objects have a property called “inheritance.” It means that if an object has a property and you use that object to create a new, specialized “child” object, the child inherits the properties of its parent unless and until the programmer overrides them.

Sometimes, teams don’t get along. Not the members of the team, or at least, not yet — the teams themselves. This is unsurprising. Teams define who we are, so anyone on another team starts out with the onus of being they.

And you know what they‘re like. Them-ness is never good.

When it comes to us-vs-them relationships, team members inherit the properties of the team.

The tendency to divide the world into us and them seems to be hard-wired. About the only thing leaders can do is to point it in more productive directions, like, for example, emphasizing that a competitor’s IT department is the true them, not another development team, or even the bean-counters in Accounting.

There’s one more, complementary tactic leaders can pursue to overcome inter-team distrust, and that’s to establish a competing dynamic … a cultural one in which everyone in IT owns IT’s relationship with everyone else in the company.

The extent to which IT staff adopt this responsibility is the extent to which they’ll consciously try to understand what’s going on out there, how IT fits into the overall picture, and, by establishing rapport and trust, to turn they into we.

Along the way they’ll discover, you can’t get them to think of you as we until you start thinking of them as us.