“I have done enough to demonstrate the correctness of my details. The defects … are merely basic and fundamental.”

END_OF_DOCUMENT_TOKEN_TO_BE_REPLACED

I have a new toy: A Dell Latitude 10 tablet running Windows 8. As I’m a Dell Guy now, I’m not going to review it: Conflict of interest, you know.

But there are limits to my self-restraint, and besides, I haven’t yet run across an unbiased comparison of iPads and any-brand Windows 8 tablets — certainly not any that concentrate on what KJR’s readers care about most: getting work done.

Windows 8 loses a bit on fit and finish. Microsoft just can’t seem to polish everything to a shine. The iPad is far slicker and smoother.

Never mind the dual UI problem (the desktop plus the “Modern” interface — the one with the big tiles). It might be kludgey, but I don’t have a better idea for one system that spans smartphones, tablets, and full-size computers.

No, the problem is that Microsoft botched the desktop interface. Three examples:

Pinch and zoom isn’t included. Except when it is. Sometimes, pinch-and-zoom works, for example, to adjust the text size in Internet Explorer or an Office (2013) document. Sometimes it doesn’t, like when you’re looking at the main Outlook display, or want to make the Ribbon or some other controls bigger.

I’m sure the design decision was made by highly trained user-interface professionals. Speaking as a highly unsophisticated szhlub who has to make sense of it, occasional pinch-and-zoom is better than nothing, but still irritating.

Windows don’t stay put. Go to the desktop. Open a few applications. Rotate the tablet (in tablet mode) to a vertical orientation. Now rotate it back to horizontal. Note how every window has changed size, proportions, and position.

C’mon, boys and girls. It’s annoying little details like these that pile up into a general sense of your ineptitude.

Nonetheless, Windows 8 tablets beat iPads for business use, because …

iOS apps have corrupted too many Word documents. For self-protection I only work with disposable copies anymore.

Then there’s what all of the various iOS Office-replacement apps do to PowerPoint presentations — garble all but the simplest slides.

Most travelers need to (at least) view and review PowerPoint presentations and Word documents. With a Windows 8 tablet they can, without ever scratching their heads, wondering what the original looked like.

Note-taking: With Office comes OneNote. If that doesn’t do it for you, you can license InfoSelect, which, in spite of recent challenges with quality assurance, is absolutely awesome for organizing all the bits and pieces of information you otherwise wouldn’t know what to do with. And for finding it when you need it. Both are far superior to anything you can run on an iPad.

First, it just inks better. My on-screen handwriting and printing are actually better than their pen and paper counterparts, because Windows 8 inks to sub-pixel resolution. The iPad? Your fingertip. 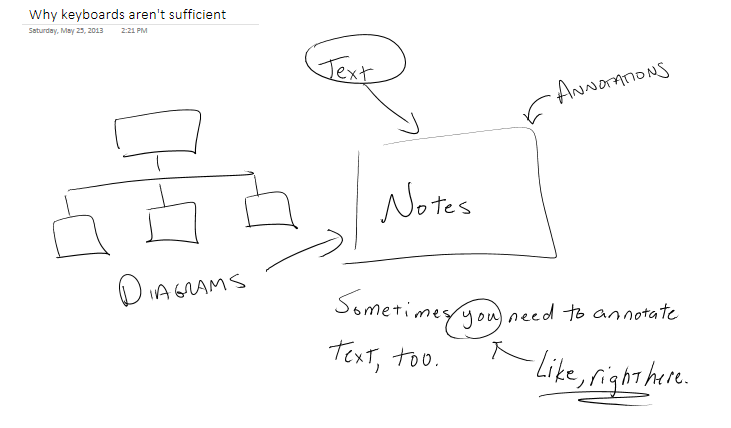 Inking might not seem like a big deal when you’re sitting at a desk where you can type, but the thing is, you aren’t always sitting at a desk. When you’re holding a tablet in one hand, writing is a lot faster and easier than one-handed typing.

And if you’re thinking note-taking with a stylus is so last-century, here’s a point: You can’t take all the notes you need to take with a keyboard. Take a look at the figure and you’ll understand the limitations keyboards bring to the note-taking party.

Then comes the coup de grace: Handwriting recognition. You can hand-write your notes and then turn them into text, with spectacular accuracy.

And it’s built into the OS as a service, so any place you use the on-screen keyboard you can also use the stylus to write your entries. Again, not a big deal at a desk, but imagine the possibilities for people who work while moving around … you know, doctors, nurses, plumbers, people like that.

Opinion: If you want to haul around just one system that handles everything (except phone calls) a Windows 8 tablet is your best choice. It’s good enough for entertainment (watching Netflix, reading Kindle books and so on).

And when you have to get down to work, even with all the aggravations there’s really no contest.